Due to unforeseen circumstances, on Monday, January 17, 2022, The Club at Candler Hills will close early at 6 pm, and The Pub will close at 5 pm. Also, Sid's Coffee Shop & Deli will be closed all day on the 17th. Sorry for the inconvenience.

The fee for a guest is $8.25 a day and $35.00 a week to utilize the fitness center. No reservations are necessary. No one under the age of 15 is allowed in the fitness center. A resident may bring two guests per visit. The resident leaves their ID card at the front desk. 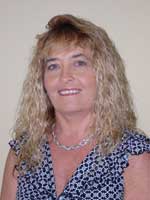 Equipment such as volleyballs, racquetballs, racquets and goggles are available for resident use. Please see gym attendant for pick-up and return of equipment. There is a $15.00 fee for all lost or damaged racquets. Golf clubs and golf balls for miniature golf are located in a plastic storage bin at hole 1 of mini golf course. Please return equipment to storage bin.

Fitness Center attendant present from opening to close. Staff present at all times to help residents.

All lockers are day lockers. Please do not leave valuables in the lockers. If locks are left on the lockers they will be removed nightly.

Members must wear proper non-marking rubber-soled shoes. No street shoes are allowed. Eye goggles must be worn during play. The courts are designed for racquetball, badminton, or Wallyball only. All residents are required to sign in before playing. Any guest of residents must sign-in and pay the fitness center attendant a guest fee of $7.50. 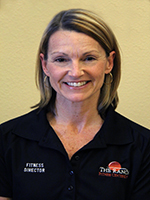 Cammy Dennis, Fitness Director at On Top of the World Communities, Inc. and The Ranch Fitness Center & Spa, has been with the company for seven years. Cammy is a native New Yorker who relocated to Florida after graduating from Rochester Institute of Technology. After years of working in the fitness industry, she combined her certifications and experience with her business degree and has enjoyed a career in Fitness Administration for the past twenty years.

Inspiring people to embrace wellness is Cammy’s passion. “I think wellness should be simple: move often, eat well and stay engaged in life. When people do this, they live long, vibrant lives. I am inspired by this every day,” says Cammy. As an active ager herself, she understands that older adults are a very diverse group of people. Cammy feels that the most important contribution she can make is to create an environment that welcomes everyone and enables all to find success. 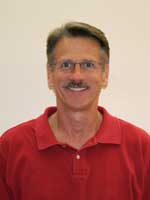 Larry Robinson is certified through the American College of Sports Medicine and has over 20 years of experience in the fitness industry. Larry’s extensive background includes fitness management, personal training and group exercise. Senior exercise science and wellness promotion for active aging adults has been a focus for Larry throughout his fitness career.

Physical Therapist may come into the Recreation Fitness Center one time to demonstrate the physical therapy routine for the resident on our equipment. Physical Therapists are not insured or approved for use of our private facility otherwise.

The Pickleball courts are for the use by OTOW residents and their guests, and for the participants in approved and sanctioned events.

Proper attire and equipment are required at all times. Shoes which may damage the court surface, bathing suits, fishnet shirts, or other unkempt or inappropriate attire or equipment are not permitted on the courts.

Group playing days and times are posted on the bulletin board located on the court premises. Outside the courts playing times, the courts are open from 8:00 a.m. to 9:00 p.m. Reservations are not necessary at the present time, however, reservations may be required in the future as the need arises.

All guests must register at the Recreation Center Office or Fitness Center Office. Children under the age of 12 can only use the courts outside the scheduled times and only when a resident player is present. All guests must be accompanied by the inviting OTOW resident, and the resident is responsible for paying a $5.00 guest fee per guest prior to play. Out of town and over-night house guests may play without limitations at a cost of $5.00 per day (per guest) or $15.00 per week, any time the resident is present. Reciprocal Gated-community and Pickleball league play are exempt from guest-play rules so long as players come to OTOW as a group. Residents must complete a Club Guest Notification form and submit to the Recreation Center Office one week prior to the guests entering the community.

The formation of leagues, inter-community teams and special events must be coordinated with the Director in charge of racquet sports. Special events playing times must be posted on the bulletin board well in advance. Click here to view Pickleball Club Reserved Court Times. (pdf 218kb)

There are twelve pickleball courts at the Recreation Center. There are ten tennis courts at Arbor Fitness Center.

The tennis and pickleball schedules are available in the Recreation and Wellness Program Guide and the On Top of the World newspaper.

If you are looking for a more competitive game of tennis, you will want to become a member of our Arbor Tennis Club. Tennis members enjoy a more structured program. Tennis clinics and lessons are available. You may also participate in USTA leagues, tournaments and other competitive play. All are run by our full-time certified professional Tennis Director on the club’s Plexicushion Prestige Acrylic playing surface courts.

The Arbor tennis courts are for the use of its members and their guests, the Tennis Director, his staff and pupils; and for the participants of sanctioned events.

Reservations can be made up to three days in advance for courts two through five, for any time of the day, and for court one, when there is no scheduled instruction or scheduled events. Special events, teaching, and league play take precedence over normal play reservations. Courts may be reserved between 8:00 am and 8:00 pm. Reservation sheets are posted at The Arbor Fitness Center. Telephone reservations will not be accepted. Members can reserve only one court per start time. Courts may be reserved for one hour for singles, and two hours for doubles. Two names must be listed for singles, and four names for doubles. Reservations are forfeited fifteen minutes after the reservation-start time, if one player is absent for singles, or two players are absent for doubles. Players are urged to cancel in advance whenever possible. Abuse of non-appearance without prior cancellation, will result in restrictions in the ability to reserve a court.

All guests and sponsoring members must register on the sign-up sheet. At least one member must be a part of the group containing guest players.

The formation of league teams, inter community teams, and special events, must be coordinated with the Director of Tennis. Play in these events may not start earlier than 10:00 am on weekdays, and 11:00 am on weekends, except for events within The Club.

When players are waiting for courts, unreserved play is limited to one hour for singles, and one and one half hour for doubles. Waiting players are permitted to ask players who have occupied the courts beyond these times, to relinquish the courts. Pets are not allowed on the courts, and children only if accompanied by an adult. Trash must be placed in the appropriate receptacles. Only non-alcoholic beverages, and non-breakable containers are allowed within the fenced area of the courts. Smoking is prohibited on the grounds of the tennis courts. The Tennis Director has the authority to ask anyone to leave the courts for infraction of any of these rules and regulations, and will also monitor compliance with the “Un-Written Rules of Tennis”, otherwise known as “Tennis Etiquette”.

Court etiquette is not explicitly spelled out in the rules, but it should be familiar territory to a tennis player who wants to be known as sportsmanlike and mannerly. Are you obeying these rules?